The Jaguar E-type has always pulled big crowds wherever it goes, but even with a racing driver at the controls, it won’t necessarily pull the birds …

Late in 1961 my father took delivery of the first Jaguar E-type to be delivered by PJ Evans, the Birmingham distributor. It was a flat-floor 3.8 convertible with the outside catches for the bonnet. White with red interior. We were not a wealthy family by any means but my father, who left school to be a panel beater, had started his own business in 1939 and had done well so was able to indulge his love of motor cars.

He had owned MkV and MkVII Jaguars and when the E-type was announced he no longer needed a family car. I was 18 and had my own transport. I went with him to collect the car. It was centre stage in the showroom and surrounded by people.

PJ Evans usually closed at 6pm but there was so much interest that they stayed open until much later. We waited patiently for the crowd to disperse and my father, with me at his side, drove it proudly out into the street. He was very gentle with the car, running it in carefully, but once it passed the 2000-mile mark we would find any excuse to take it on the Ml and fly along with the top down. It had to be the best looking car ever produced in the UK and had the speed to match the looks. Jaguar said it was good for 150mph and we saw that from time to time on the Ml, which in those days was deserted.

Before long I had persuaded father to let me drive it. I’d started to modify my Mini and was getting the taste for speed. I loved it of course, but found the unsynchronised first gear very slow. He’d heard that Jaguar was bringing out a 4.2-litre version with an all-synchro gearbox and we were promised the first car again. It was delivered in early 1965 and he let me borrow the car for a round-trip to Germany where I was driving in the six-hour saloon car race at the ‘Ring. I took my then girlfriend with me, but even the E-type didn’t stop her from running off with one of my team mates – (I won’t say which one. His wife may be reading this).

Even today the E-type attracts attention, especially in the US where I spend a lot of time. I love watching the E-types at the Goodwood Revival. Nick Whale invited me to co-drive his immaculate example a few years back. I didn’t really do it justice but there was little time to make adjustments. Nick was very fast but I just couldn’t get used to the immediate oversteer when I so much as looked at a fast comer. I have always been used to and enjoyed driving cars with a slight understeer and having to induce the oversteer myself.

In 1961 my father would have paid about Â£1750 for his car, which is about Â£48,ooo in today’s money. A really nice example now would set you back three to four times.

Jaguar Land Rover Classic recently announced a short run of restored Series I cars called the E-type Reborn for £285,000. I’m a little skeptical of this manufacturer initiative, but the industry’s restorers and dealers will no doubt be pleased. It should push the bar up quite a lot. 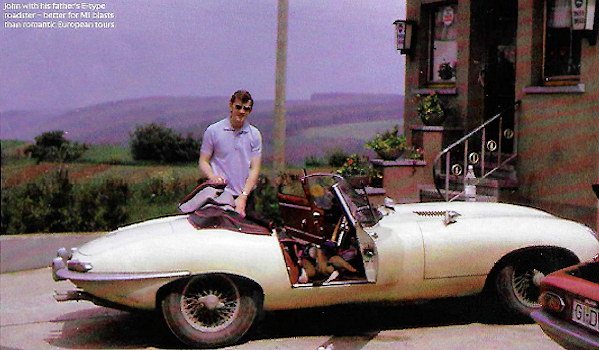