Over the years, John has owned many cars that are considered classics now – but he never ceases to be amazed how valuable some have become …

One of my favourite cars was the Porsche 911 Carrera RS 2.7. I had driven a 911S for Kremer in 1972 and won the European GT Championship and the Porsche Cup. At some of the long-distance races, Peter Falk appeared from the Porsche factory with a 911 test car with a 2.7 engine, coil-sprung rear suspension and a ducktail on the engine cover.

This was to be the GT race car for 1973 but Porsche needed to produce a road car for homologation, so in late 1972 it announced the 911 Carrera RS 2.7. The first ones were all white with either red, green or blue Carrera graphics on the side. I ordered one from Kremer and took delivery in early ’73.

It was an enormous improvement on the 911S, both in terms of power and road holding and as a race car it was several seconds faster. I used it around Europe for a while in 1973 but I was also driving for Ford, which wanted me to drive a Capri RS to the races, so I eventually sold the Carrera. Later in the year, after my Ford contract expired, I bought another Carrera, this time a yellow one with black script. I think it cost me about £7000 -it would probably sell for nearly half a million now.

I have often wondered what happened to those 2.7s and if they went to good homes. Last year I found out. I was playing in Howden Ganley’s Judy Ganley Memorial golf day and was drawn to play with Ross Brawn. I was asking him about the ex-Moss Ferrari 250GT he owned and he asked me whether I had ever owned a 911 Carrera RS. I said I had … and he told me he’d recently bought one and that there was a John Fitzpatrick down as first owner in the registration book. Was it me? Indeed it was -so it had found a very good home!

Who could ever have dreamt that so many cars like the Carrera would become collectors’ classics after all these years? Even a standard 911S or 911E from the early Seventies tops £100,000 now. I owned a 911E before the Carreras and I noticed that it was in the RM Sotheby’s auction on September 6, still owned by the family of the gentleman to whom I’d sold it 45 years ago. It was hammered away for £126,500, way over its £70-9ok estimate.

I have to tell you my father was a bit put out when I bought my first German car. He’d been a Jaguar enthusiast for many years and had owned one of the very first E-types delivered in 1962, a flat-floor 3.8. He used to let me borrow it from time to time, but that’s another story.

Over the years I have owned many different Porsches but the Carrera RS remains my firm favourite. It was a giant leap ahead of the 911s and probably the nearest thing to a race car that I ever drove on public roads. Of course, in those days they were far less crowded, so you could really use it in the way it was intended. It seems such a shame that people today can’t enjoy them in the way we used to. I was lucky to have been born at such a good time, I guess. 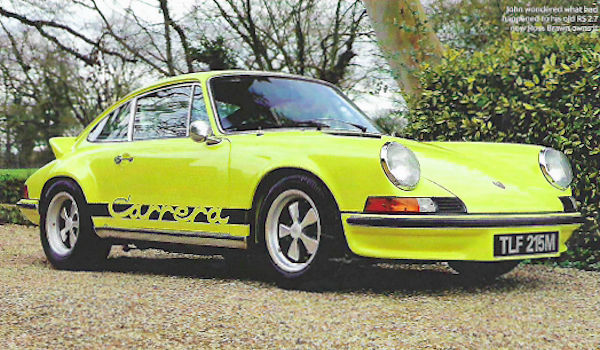