While one of John’s friends refused to let him drive his dog-eared Daytona, another gave him free rein in his while plying him with rv1onza’s finest food.

For me, one of the best looking cars in its day was the Ferrari 365 GTB/4 ‘Daytona’. In 1971 I’d been driving a BDA Escort for Broadspeed and Ford Cologne with a fair amount of success. As a result, Broadspeed had taken a few orders for replica Escorts to be raced in the 1972.

European Touring Car Championship. One such order came from Martino Finotto, a wealthy Italian in the baby food business. Martino was also a proficient racing driver and his Escort was built and delivered prior to the opening round of the European Championship, the Monza 4 Hours. He asked me to co-drive with him to help him set up the car and get used to it.
I flew into Milan on the Thursday evening and Martino was there to meet me. We walked out of the terminal to the parking lot where he told me he’d brought a car for me to use for the weekend. Much to my surprise, parked alongside each other were a red Ferrari Daytona and an orange Alfa Montreal. ‘Which-a one do you wanna drive?’ he asked. I could hardly believe it. Of course I chose the Daytona. ‘We go to eat’, he said and I did my best to keep up with him on the way to the Ristorante Fossati in Canonica just outside Monza. He drove the Alfa like a complete lunatic, as most Italian racing drivers do on the road, but we arrived in one piece.

The Daytona was a dream to drive; a big car with great handling and plenty of brute force. The nearest I’d come to driving a Daytona before was one belonging to a friend of mine in Birmingham. It was his everyday transport. He never let me drive it but I went out in it with him a few times. He was a good driver, having won the British Rally Championship in the Sixties, so he could handle it well. But it wasn’t the tidiest car in the world – he had two Great Dane dogs that he wouldn’t let in the house so they lived in the Daytona. The most expensive dog kennel in the world.

By the time he sold it, the seats were chewed to pieces. I think he more or less had to give it away – how times change.
I digress. We enjoyed a great meal in the Fossati as usual but when we came out, the rear window of the Daytona had been smashed and my racing bag with overalls and helmet had gone. Welcome to Italy! Martino didn’t seem too upset. He took the Daytona home and gave me the Montreal for the weekend. A great car too, but no Daytona. I was never much of an Alfa fan, but the Montreal was good fun and I had driven and enjoyed Toine Hezemans’ GTA at Zandvoort on a few occasions.

Martino arrived the next morning for practice with a new helmet and full racing kit for me, and the Daytona with a taped up rear window. The 2.0-litre Escort seemed quite tame after the Ferrari and Alfa, and it didn’t last long before the differential gave up. To be honest, I enjoyed driving the two GT cars for the weekend more than I did the Escort. Plus the trip was worth it for dinner at the Fossati every evening alone. 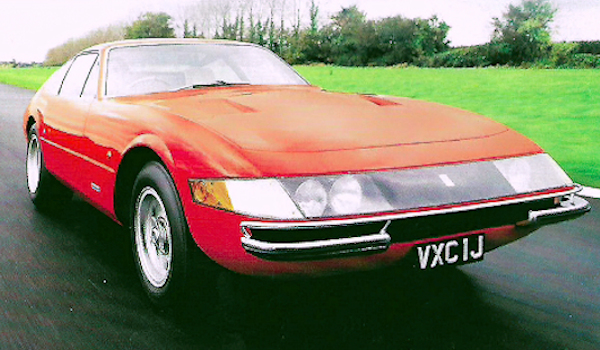