In 1971 Martin Hone was busy trying to promote a Birmingham Grand Prix. It took him and others 15 years to convince the authorities that it was a workable project and would bring publicity to the city. His plan was to use the new inner ring road and he asked if I could find a suitable openÂ­top car to drive around the proposed circuit with a local ATV camera man.

Back then I was driving for Ford Cologne and my loan car was an RS2600 Capri. Ford had produced a limited run of highly modified Capris to homologate for Group 2 racing with the 2.6-litre V6 producing well over 25obhp, stiffened suspension and lightweight door and body panels. It was a rocket ship and German-registered, which saved me a few speeding tickets after addressing British police in my best German. 'Gu ten Tag officer. Was ist los?'
The weekend after Martin's call I bumped into Alan Edis, a good friend from Birmingham and a motor racing enthusiast involved with Jim Whitehouse's Arden Mini Team. He also happened to be director of product planning for British Leyland and was contemplating a high performance version of one of its road cars. He was fascinated by my RS Capri and asked if he could borrow it for a few days. He offered me a Triumph Stag in return. Although not a very exciting prospect, it did occur to me that the open top Stag would be ideal for taking the
cameraman around the proposed Birmingham circuit.

We did the swap and early on Sunday morning I drove around the circuit with the cameraman on the back, with Martin holding on to him for dear life. Well, he did say he wanted to drive around quickly and who was I to argue? I met with Alan a few days later and he was very impressed with the Capri. No doubt the experimental department had been crawling all over it. I can't say I was too impressed with the Stag but they tell me a concours condition one is worth about Â£35,000 these days.

The Capri could hardly be called a classic but it was an amazing road car. I had driven it to a race in Zandvoort one weekend and had intended to leave it with my good friend Tonio Hildebrand in Amsterdam while I flew back to Birmingham. After the race I was in a big hurry to get to Schiphol to catch a BEA flight and told Tonio I would park the car near the terminal for him to collect. I arrived with minutes to spare, parked in front of the terminal and dashed inside to check in, leaving the engine running and boot open, intending to come straight back and take it to the car park.

I was told I had a few minutes to make the plane. I set off in a panic and it wasn't until I was on it that I remembered the Capri. I explained things to a BEA person and gave them Tonia's phone number. Later that evening I called him and asked what had happened. He'd made it to the airport about two hours later. The Capri was still sitting outside the terminal, engine running and boot open. I didn't mention the incident to Ford team manager Jochen Neerpasch. 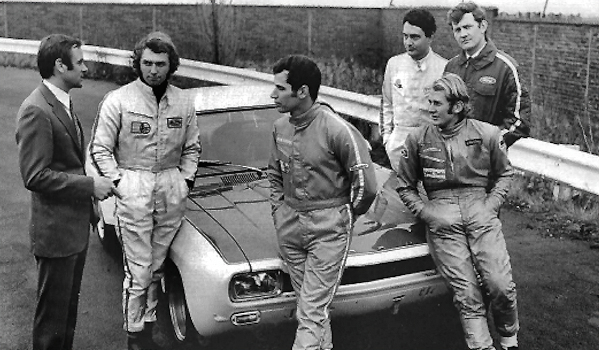