Back in 1972, en route to picking up an early production BMW 3.0 CSL, John received an offer that he had to refuse – much to his chagrin

The BMW 3.0 CSL has always been one of my favourite road cars and I was astonished to see a pristine model for sale at £2ook recently. I was fortunate enough to have one of the first left-hand-drive models to be delivered. The CSL handled beautifully on the road and on the track, well ahead of its competition.

In 1972 I won the 6hr Touring Car race at the Nurburgring driving a Schnitzer 2.8CS with Rolf Stommolen, and I just loved the car. If a car handles well at the ‘Ring it will handle well anywhere. When the CSL was announced later that year I knew I had to have one. Through various contacts I was able to secure an early production model, which I planned on picking up from Munich on Zoll plates. On the way there I stopped off in Cologne to see Michael Kranefuss, who’d taken over from Jochen Neerpasch as competition manager at Ford Germany after Jochen moved to BMW.

Stuart Turner had suggested to Kranefuss that he take Gerry Birrell and myself on to drive the RS2600 Capris in 1973.

Gerry and I signed very good contracts, along with Jochen Mass and Dieter Glemser. It was a lot more money than Gerry or I had earned before, so I set off for Munich feeling very pleased with myself.

On arrival at BMW the receptionist told me that Jochen Neerpasch would like me to pop into his office to say hello. I was a bit wary of meeting him again because I’d had a few cross words with him at the end of the 1971 season when I was driving the BDA Escort for him at Ford.

The Capris had been set to triumph in the European Championship but needed to win the last race of the year at Jarama to be certain to beat Alfa Romeo. Jochen Mass and I had led the four-hour race ahead of the Capris for about three hours and I was due to take over from Jochen for the last hour. Neerpasch had told me to slow down and let the Capris win. There had been reliability problems with the Escort at most races and a win at Jarama would have made up for a lot. I made it clear to Neerpasch that I was unhappy with this, although ultimately the Capris had a problem and Mass and I went on to win. I put on a brave face and went up to his office. He gave me a very warm welcome, offering me a contract for 1973 at twice the salary Ford was paying. Needless to say, I was a bit miffed at the missed opportunity – even more so when the Capris turned out to be almost undriveable, while the CSLs had their rear wings homologated and disappeared even further into the distance. Chris Amon got the drive instead.

However, on the way home to the UK the CSL was magic. A wonderful exhaust note, great performance and handling, and as much fun as the RS Carrera that I acquired later in the year. It certainly was a head­turner and my friends were very envious. I did eventually get to race the CSLs, with wins at Daytona and Silverstone in 1976 and at Mugello in 1977. A truly great car that I wish I still owned today. 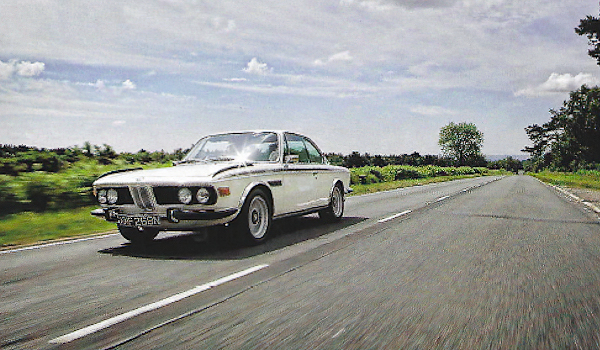