FITZ – My Life at the Wheel

FITZ – My Life at the Wheel takes the reader on a personal journey through the life of a champion, with poignant recollections of the challenges experienced and the unbridled determination and endurance that he demonstrated to succeed in a sport that sees victories scored in inches not in rhetoric.

Of course, he won in most and now enjoys retirement from a racing career that lasted nearly a quarter-century and produced championships in the British Saloon Car Championship (1966), the European GT Championship (1972 and 1974), and IMSA’s Camel GT Championship (1980). There were also victories in numerous major races, including several class wins at Le Mans and overall triumphs in the Rolex 24 at Daytona, the 12 Hours of Sebring and the Bathurst 1000.

This book chronicles that career, and is introduced by no less than three Forewords, penned by contemporaries Howden Ganley, David Hobbs and Tim Schenken. It moves on from those testimonials to tell the story of the vision and determination that brought Fitzpatrick his success. Liberally illustrated with photographs from his career and his life with his family, this is a worthy edition to any enthusiast’s library

Illustrated with 131 black & white and 236 colour photographs, many never before published and packed with 13 chapters of thrilling, yet heart-warming accounts of the life of a man with a purpose – to be the best.

FITZ: My Life At The Wheel chronicles John’s twenty-two years competing on many of the most famous circuits in the world in some of the most iconic cars of the 60s, 70s and 80s. 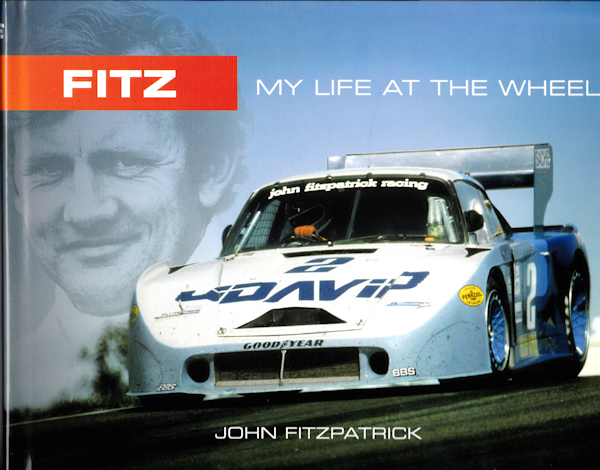 “The behind-the-scenes stories told here are worth the price of the book and the photos tie the package together beautifully.”

“It is a chronological look at the career of one of the UK’s most successful sports and saloon car drivers, the racing memories sprinkled with many incidental anecdotes – such as racer Toine Hezemans and entrant Georg Loos throwing each other’s’ watches against a wall, to see whether a Seiko was as resilient as a Rolex, the kind of thing that was fairly standard 30-odd years ago, yet would nowadays doubtless be dismissed as puerile or unprofessional. It combines the factual and the amusing with the poignant, Fitzpatrick’s reflections of Rolf Stommelen’s final race – and its aftermath – serving as a powerful reminder of the era’s potential perils, yet the author came through it with nary a scratch. A worthwhile read”

“From early Minis through to beating the works teams with Derek Warwick in a Porsche 956 at the 1983 Brands Hatch 1000 Km, Fitzpatrick covers a wealth of experiences. Ford training camps, the nightmare of sponsor Jerry David Dominelli and the loss of teammate Rolf Stommelen are just a few insightful sagas in this highly recommended book that features more than 350 dramatic images.”